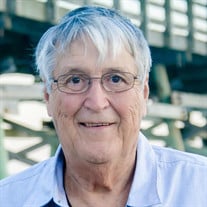 William David (Bill) McCollum of Locust, N.C., loving and beloved husband and father, died the morning of Monday, Dec. 27, 2021, succumbing to complications from progressive supranuclear palsy. He was 80. McCollum was a United States Army veteran, a longtime sales representative with Nabisco and above all a devoted family man. He and his wife, Joan McCollum, lived for several decades in Charlotte, raising a family of three children before moving to Oakboro, N.C., in 1998 and to Locust in 2016. The couple celebrated their 55th wedding anniversary on Aug. 20. Tall, sweet-natured and blessed with a distinctive Southern drawl, McCollum was an unassuming observer of life and an upbeat storyteller, as keen talking about current events as he was reminiscing about family moments and his small-town Carolina youth. In his rounds with Nabisco and later with Snyder’s of Hanover, the congenial sales rep was quick to make friends, widely liked by his colleagues in the grocery business and others he met along the way. At the time of his death, he was in remission from leukemia that had been treated since 2019. McCollum spent his final days surrounded by family with some of his favorite music as a backdrop, including classic country, rock ‘n’ roll and childhood favorites such as Roy Rogers. Born on a kitchen table in a Lockhart, S.C., mill house on March 23, 1941, he was the son of Sam and Audrey McCollum and was the younger of two siblings. Known in his youth as David McCollum, he lived for several years in Rockingham, N.C., before returning to his hometown as a teenager and graduating from Lockhart High School in 1959. McCollum was drafted into the U.S. Army in 1963, reaching the rank of SP5 before his honorable discharge in 1969. While stationed in Carlisle, Pa., he met wife-to-be Joan Doocey, and the two wed in 1966. Carlisle brought another key development: He came to be called Bill, a name he embraced the rest of his adult life. McCollum enjoyed camping, the outdoors, home projects and pets, including his dog Monkey. He was an eclectic music fan whose tastes ranged from Kid Rock to Prince, and he became a regular concertgoer during retirement. He was also a longtime leader with the Boy Scouts, working with Troop 12 at St. John Neumann Catholic Church in Charlotte and attending the BSA’s 75th-anniversary national jamboree in 1985. McCollum’s languid drawl was a secret weapon of sorts: Behind the booming voice and gentle disposition was a sharp mind that excelled at math and history, and McCollum’s low-key nature could disarm Trivial Pursuit opponents before he went on to dominate the game. Most of all, McCollum cherished family, swept up in the interests and careers of his children while fond of outings to the Great Smoky Mountains and favorite sites such as Cades Cove. In recent years, he found joy in his visits and daily FaceTime chats with his grandson, Liam. He is survived by his wife, Joan McCollum of Locust; a son, Brian McCollum of Detroit; daughter Kathaleen (K.C.) McCollum Levings and her husband, Rob Levings, of Milton, Fla; daughter Megan McCollum of Washington, D.C.; a grandson, Liam Levings; a sister, Myrtis Rainwater of Union, S.C.; and many much-loved nephews, nieces, in-laws and cousins. Cremation arrangements were handled by Stanly Funeral and Cremation Care in Locust. A memorial event will be scheduled in the Locust area in the spring. In lieu of flowers, donations can be made to the Leukemia & Lymphoma Society at https://www.lls.org/.

The family of William David "Bill" McCollum created this Life Tributes page to make it easy to share your memories.

Send flowers to the McCollum family.