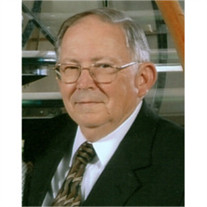 Stephen L. Sasser, age 79 of Albemarle, NC passed away at his home on Tuesday, August 15, 2017.?? His service will be 11:00 AM Tuesday, August 22, 2017 in the First Baptist Church of Albemarle, NC with the Rev. Andy Jung and Rev. Russ Myers officiating.? Burial will follow in the Stanly Gardens of Memory.? The family will receive friends at the Stanly Funeral & Cremation Care on Monday, Aug. 21, from 5:00 PM to 7:00 PM. Mr. Sasser was born on September 8, 1937 in Stanly County, NC to the late Bruce Benton Sasser and Nellie Talbert Sasser and a graduate of Albemarle High School and Wake Forest University with a BS degree in Political Science.? He was a member of the First Baptist Church of Albemarle where he served as a Deacon, Member of the Finance Committee, Member of Meals on Wheels of Stanly County, worked as a Habitat for Humanity Volunteer, former Albemarle Optimist Club member, and as former band ?player with the Josey Brown Combo.? He was a veteran of the US Air Force later serving with the Air National Guard in Badin, NC Mr. Sasser formerly worked with Southern Railway .? He was in insurance sales with Integon of Winston-Salem, NC being president of his department.? Later he worked with Triad Life Insurance Co. as an underwriter and retired from Liberty Life Insurance Company of Greeenville, S.C. as an underwriter. He was married to Patricia Russell Sasser who survives of the home.? Other survivors include one son, Mark R. Sasser and wife Deb of Greensboro, NC and grand dog Jenny, one sister, Gwen S. Hager and husband Fred of Holly Springs, NC and a number of nieces and nephews. ??A son, Christopher Sasser preceded him in death in 1999. Memorials may be made to Community Home Care & Hospice, 1024 Albemarle Road, Suite 904, Troy, N.C. 27371 or First Baptist Church of Albemarle, 202 N. 2nd Street, Albemarle, N.C. 28001. Stanly Funeral & Cremation Care of Albemarle is serving the Sasser family.

The family of Stephen L. Sasser created this Life Tributes page to make it easy to share your memories.

Stephen L. Sasser, age 79 of Albemarle, NC passed away at his...

Send flowers to the Sasser family.