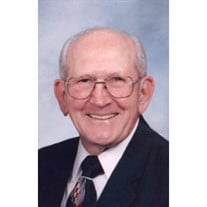 Robert Earle (Bob) Taylor, Sr., 90, of Oakboro, was led into Heaven by the hand of his Lord and Savior Jesus Christ on Friday, May 4, 2018. His memorial service was held at Loves Grove United Methodist Church in Stanfield on May 11, 2018. Robert was born in 1927 in Columbia, SC to the late Nellie Mimms Taylor and Edward Dewitt Taylor. Mr. Taylor was a veteran of World War II, having served in the Army Air Corps-Pacific Area 5th Air Force. He also served in the US Air Force as a reservist in the Civil Engineering Division from 1957 through 1961. Robert was a civil service employee, having worked at the Naval Facilities Engineering Command, Atlantic Division, Camp Lejeune, NC and Norfolk, VA, and Southeastern Division in Charleston, SC. ?He also worked for the Department of Housing and Urban Development, Architectural and Engineering Division, in Columbia, SC. He retired from HUD as a Construction Analyst. Robert was a devoted and wonderful father, husband and grandfather. He was always generous in showing his love. He was a warm and outgoing person who made friends easily. He was known for his friendly smile and his tremendously positive outlook on life. Robert was always the optimist and imparted his enthusiasm to the people around him. He was also a man of profound and unwavering faith, who always tried to live the right way. He was an active church member for many years. Robert was greatly loved by his family and friends, and he will be greatly missed. He is survived by his wife Maggie Lou Taylor, son Dr. Robert Earle Taylor, Jr., daughter Joyce Walker and husband Woody, granddaughter Marissa Walker, and brother Alvin Taylor of Columbia, SC. Memorials may be made to the Building Fund of Love?s Grove United Methodist Church, PO Box 276, Stanfield, NC 28163.? Condolences may be made online at www.stanlyfuneralhome.com. Stanly Funeral and Cremation Care of Locust is serving the Taylor family.

Robert Earle (Bob) Taylor, Sr., 90, of Oakboro, was led into Heaven by the hand of his Lord and Savior Jesus Christ on Friday, May 4, 2018. His memorial service was held at Loves Grove United Methodist Church in Stanfield on May 11, 2018. Robert... View Obituary & Service Information

The family of Robert Earle Taylor, created this Life Tributes page to make it easy to share your memories.

Send flowers to the Taylor, family.