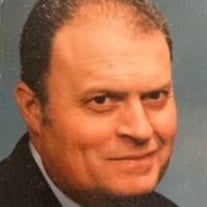 Robert Louis Bonti, 82, of New London, passed away on Monday, August 23, 2021 at UNC Hospital in Chapel Hill, NC. A celebration of life service will be held at 3pm on Friday, September 3, 2021 at Chandler’s Grove United Methodist Church in New London. Visitation will be held from 2-3 prior to the service in the church sanctuary. Robert was born October 15, 1938 in Brooklyn, NY to the late Viola McLaughlin Bonti and Louis Gerald Bonti. Before moving to New London, Robert was a member at Resurrection Lutheran Church in Charlotte, NC. After moving to New London, he became a member at Chandler’s Grove United Methodist Church and enjoyed serving in any way he possibly could. His hobbies included watching football, fishing, and traveling to the beach. Robert retired from the Mecklenburg County Tax Accessors Office. After retirement, Robert owned and operated B & D Bookstore in Albemarle for 15 years. Robert was a loving husband, father, and pawpaw. Mr. Bonti is survived by his wife of 63 years, Dorothy Gay Skinner Bonti of New London; daughters: Teresa Wright (David) of Clemmons, NC, DeAnna Anderson of Chattanooga, TN, and Lisa Folino (Anthony) of Harrisburg, NC; 11 grandchildren; 11 great-grandchildren. He is preceded in death by his brother Gerald Bonti. Stanly Funeral and Cremation Care of Albemarle is serving the Bonti family.

The family of Robert Louis Bonti created this Life Tributes page to make it easy to share your memories.

Robert Louis Bonti, 82, of New London, passed away on Monday,...

Send flowers to the Bonti family.