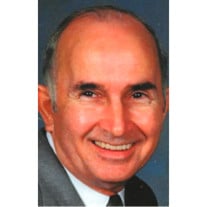 Myron Gene Harrington, Sr., 87, of Albemarle passed away Saturday, September 2, 2017 at Carolina Rehabilitation Center in Concord.? His funeral will be Monday, September 4th ?at 12:00PM at Westminster Presbyterian Church with Rev. Doug Peterson officiating.? A private burial will take place on Tuesday, September 5th at Fairview Memorial Park.? The family will receive friends at the church from 10:00AM until 12:00PM prior to the service. Born February 9, 1930 in Albemarle, NC, he was the son of the late Vance Benton Harrington and Dora Lee Mann Harrington.? He was a 1948 graduate of Albemarle High School where he was a member and captain of the football team and also a member of the basketball team.? He worked and retired from Coca-Cola.?? He was a member of the Westminster Presbyterian Church where he served as Elder and obtained Status of the Elder Emeritus.? He was also active in the YMCA and local Uwharrie Senior Games having won gold medals in basketball shooting, corn hole, table tennis, football throw, softball throw and bocce ball.? He was a gold medalist in the North Carolina Sr. Games in basketball shooting and cornhole.? Over the last 4 years he had won 26 gold medals. Mr. Harrington is survived by his wife and high school sweetheart Betty Lou Still Harrington, who were married on January 29th, 1949, he is also survived by daughter Betsy Harrington Lynch and husband Bob, two sons; Myron Harrington, Jr. and wife Andrea, and Steve Harrington and wife Bebe, ten grandchildren;? Jon (Adrienne) Osborn, Bethany (Steven)? Weber, Amanda (Jeremy)? Hathcock, William ?(Ashley) ?Harrington, Paige Harrington, Claire (Weston) ?Church, Jeffrey Harrington, Bradley (Kelly) Harrington, Ashley Harrington, and Wesleigh Harrington, eight great grandchildren; Mallory and Savannah Osborn, ?Lucy, Grayson, and Jonah Hathcock, Bryce and Blake Weber, and Rhett Harrington, and sister Jane Deane.? He was preceded in death by his twin sons Donald Benton and Douglas Allen, and a brother Brian Harrington. In lieu of flowers the family requests that memorial contributions be made to Westminster Presbyterian Church 1804 Badin Road Albemarle NC 28001.

The family of Myron Gene Harrington, created this Life Tributes page to make it easy to share your memories.

Send flowers to the Harrington, family.