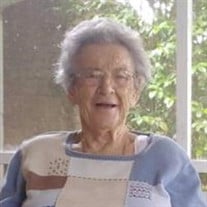 Mildred Smith Davis, 97, died peacefully at Mercy Hospital on Nov. 3, 2021 after a period of declining health. “Miss Mildred” was born in 1924 in the small rural community of Pee Dee in Montgomery Co., NC to the late Mae Whitley Smith and John Gaston Smith. She had two sisters Mary Catherine Smith and Fannie Mae Smith Russell who preceded her in death. During World War II, she moved to Albemarle to work in Wiscassett Hosiery Mill. While in Albemarle, she met her husband, Johnny B. Davis. They were married on March 8, 1947 and were married for 49 years before his death in 1996. They were blessed with two daughters, Lorraine Davis Byrd and Patsy Davis Beeker both of Concord, NC. Mildred is also survived by four granddaughters, Susan Byrd of Concord, Elizabeth Byrd Basinger of Albemarle, Kelly Beeker Durkee (Scott) of St. Clair Shores, MI, and Jennifer Beeker of Ferndale, MI, as well as four great-grandchildren Nathan (Caitlin) Basinger, and Jonathan, Allison and Meredith Durkee along with her precious cat, Cassie. She was predeceased by a great-grandson, Jordan Keith Basinger. Mildred was a devoted homemaker. She loved baking, gardening and growing beautiful flowers and tomatoes. She lovingly baked delicious cakes as gifts for friends and dinners at Second Street Presbyterian Church, where she was a faithful member from the time of her marriage until her death. Even after a hip fracture in 2017, she continued using her riding lawnmower to mow her yard. It was her happy place. Sunday dinners at her house were a standby, even when her caregivers did the cooking under her direction from her perch in the kitchen. Her loving family always gathered at her table for holiday meals and celebrations. Her quick wit and dry sense of humor were trademarks of any conversation! Mildred was blessed with many angels to help care for her. Ms. Cynthia Isenhour, Ms. Jeanette Hughes, Mrs. Jeanette Watkins, and the kind nurses and staff at Mercy Hospital. In lieu of flowers, the family requests donations in her memory be made to Second Street Presbyterian Church, 105 Hearne St., Albemarle, NC 28001. A celebration of her life will be held at Second Street Presbyterian Church on Monday, November 8, 2021 at 2pm. Visitation will be at Stanly Funeral and Cremation Care of Albemarle from Noon until 1:30 prior to the service at the church.

Mildred Smith Davis, 97, died peacefully at Mercy Hospital on Nov. 3, 2021 after a period of declining health. &#8220;Miss Mildred&#8221; was born in 1924 in the small rural community of Pee Dee in Montgomery Co., NC to the late Mae Whitley... View Obituary & Service Information

The family of Mildred Smith Davis created this Life Tributes page to make it easy to share your memories.

Send flowers to the Davis family.