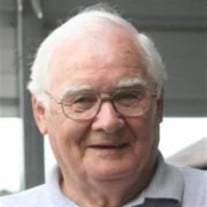 Melvin Thomas Green, 87, of Locust passed away Sunday, April 25, 2021 in his home. His funeral will be 2 PM Wednesday, April 28th at Meadow Creek Primitive Baptist Church with Elder Eddie Fowler and Elder Charles Smith officiating. Burial will follow in the First Baptist Church Cemetery, Locust. The family will receive friends on Tuesday evening from 6 until 8 PM at Stanly Funeral and Cremation Care of Locust where the body will remain until take to the church to lie in state 30 minutes prior to the hour of the service. Born March 30, 1934 in Cabarrus County, he was the son of the late Raymond Green and Gladys Furr Green Voncannon. In addition to his parents he was preceded in death by a daughter Janet Green and an infant son Roger, as well as a sister Jane Morgan and brothers Jack Green and Bobby Green. Melvin attended Bethel School and was a member of Meadow Creek Primitive Baptist Church. He worked as a Photo Textile Engraver. He was a wonderful husband, father, grandfather, great-grandfather and great-great grandfather. He loved working in his yard and growing flowers and vegetables. He is survived by his wife of 66 years, Mary Ruth Furr Green, son Michael Todd Green (Debra) of Locust, daughter Susan Smith (David) of Locust, sister Alma Little of Stanfield, 7 grandchildren Chris Toole, Melissa Feguerado, Michael Smith, Brandon Green, Bridget Green, Megan Hayes and Mark Green, sister-in-law Kathy McGinnis of Monroe and brother-in-law Tarp Morgan of Stanfield, 6 great-grandchildren and 2 great-great grandchildren.

The family of Melvin Thomas Green created this Life Tributes page to make it easy to share your memories.

Send flowers to the Green family.