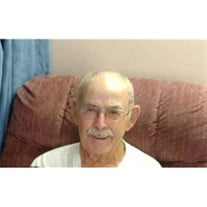 Julian Anderson Sikes, 85, of Badin, N.C., passed away Saturday, November 12, 2016 at his home. Born October 9, 1931 in Badin, N.C., he was the son of the late Henry Sikes and Evelyn Cathey Sikes.? He was a graduate of Badin High School.? Mr. Sikes retired from ALCOA where he was an electrician with the River Gang.? He was a member of Congregational Christian Church in Albemarle.? He was an ultimate gardener, fisherman, wood worker, potter, and also a former member of the Army National Guard stationed in Albemarle. Mr. Sikes is survived by his wife Joan Eagle Sikes of the home.? One son, David Whitley preceded him in death.? He is survived by one son, Henry Sikes of Walterboro, SC., three daughters, Cindy S. Denn of Frederick, Wisconsin, Cheryl S. Hartman of Concord, NC, and Karen Whitley of Albemarle, NC., and a special family friend Pat James of Albemarle, NC.? He was also survived by 5 grandchildren and 7 great-grandchildren. There will be no services. The family would like to thank the nursing staff of the third floor of Carolinas Healthcare System Stanly for the compassionate care shown to Mr. Sikes.? They wish to thank Hospice of Stanly & Uwharrie for the care and compassion they have shown Mr. Sikes and the family. Memorials can be made to Hospice of Stanly & Uwharrie, 960 N. First Street, Albemarle, NC., or Congregational Christ Church, 119 Carolina Avenue, Albemarle,? NC.

The family of Julian Anderson Sikes created this Life Tributes page to make it easy to share your memories.

Send flowers to the Sikes family.