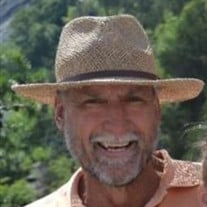 John Ervin Eudy, Jr., 70, of Albemarle passed away on Friday, February 18, 2022 at his home surrounded by family. His funeral service will be held at 4PM on Sunday, February 20, 2022 at Gleaning Mission Church in Oakboro officiated by Pastor Steve Barbee and Pastor Josh Eudy. Visitation will be held from 3-4PM prior to the service in the sanctuary. Burial will follow at Oakboro Cemetery. Mr. Eudy was born October 6, 1951, in Stanly County to the late John Ervin Eudy, Sr. and Mary Elizabeth Dennis Eudy. He served for 41 years with the North Carolina Air National Guard and retired as a Senior Master Sergeant. He was a veteran serving in Desert Shield/Desert Storm and Operation Iraqi Freedom. John enjoyed being outdoors and took his family camping over the years. He loved using his hands to build and fix anything that needed restoring. John was an active man of strength, but his heart was filled with love for his family, church, and friends. He was also known as “Jungle John” because kids would climb on him, and he would toss them around. His grandchildren adored him and his playful personality, always making them feel special. John was always willing to go above and beyond to help anyone in need. His kind heart was a reflection of Jesus and his faith in God. John is survived by the love of his wife Debbie Hartsell Eudy; sons: Josh Eudy (Ashley) of Locust, Justin Eudy (Kristi) of Albemarle; grandchildren: Zain, Logan, August, Nixon, Sawyer, and Ashton; siblings: Hazeline Hinson (Bud), George Eudy (Debby), Paul Eudy (Jane), Ben Eudy, Thomas Eudy (Pennie), Gathie West; and many nieces and nephews. Stanly Funeral and Cremation Care of Albemarle is serving the Eudy family.

John Ervin Eudy, Jr., 70, of Albemarle passed away on Friday, February 18, 2022 at his home surrounded by family. His funeral service will be held at 4PM on Sunday, February 20, 2022 at Gleaning Mission Church in Oakboro officiated by Pastor... View Obituary & Service Information

The family of John Ervin Eudy, Jr. created this Life Tributes page to make it easy to share your memories.

Send flowers to the Eudy, family.