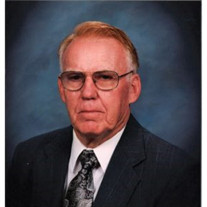 Jack Thomas, 82, of Stanfield passed away Saturday, March 31, 2018 at the Tucker Hospice House in Kannapolis, NC. His funeral service will be Thursday, April 5 at 2 PM at Big Lick Baptist Church with Rev. Jeff Springer officiating. The family will receive friends from 12 PM till 1:30 PM at the church prior to the service. Burial will follow the service in Oakboro Cemetery. Born August 4, 1935, in Anson County, Jack was the son of the late John Ray Thomas and Ruth Leone Watson Thomas. He retired after 30 years with the Oakboro Police Department as Chief of Police. Mr. Thomas was a member of Big Lick Baptist Church and a veteran of the US Army. Jack enjoyed serving with the Christian Cooking Convoy for over 30 years. He humbly gave of his time, talents, and self to make the world a better place. His legacy will live on in the lives of those he touched. Jack is survived by his wife, Grace Thomas of the home. Other survivors include a son, Eric Thomas (Pam) of Locust, daughter, Carolyn Jennings (Wynn) of Anchorage, Alaska, step-son, Darin Thomas of Stanfield, brother, Joe Thomas of Asheboro, grandchildren, Elena Dalton and Derrick Thomas, and great-grandchild, Ava Dalton. In addition to his parents, Jack is preceded in death by former spouse, Peggy Thomas, sister, Azile Sites, and brothers, William and Mack Thomas. The family would like to give special thanks to the staff at the Tucker Hospice House for the exceptional care given to Mr. Jack Thomas and his family. In lieu of flowers, memorials may be made to the Tucker Hospice House at 5003 Hospice Ln, Kannapolis, NC 28081 as well as Gideons International at The Gideons International Processing Center, P.O. Box 97251 Washington, DC 20090-7251. Stanly Funeral & Cremation Care of Locust is serving the Thomas family.

The family of Jack C. Thomas created this Life Tributes page to make it easy to share your memories.

Send flowers to the Thomas family.