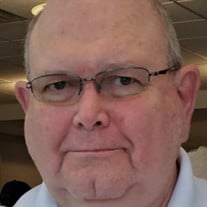 Howard James Whittington aged 76 passed away peacefully surrounded by his family on December 28, 2021. He was born June 24, 1945 to Homer and Georgia Whittington in Lenoir NC. After graduating from Lenoir-Rhyne College (now University) in 1968 he married his special love, Rachel Lefler whom he had met while there. Howard and Rachel enjoyed a wonderful and fulfilling marriage of over 53 years. Howard taught English Literature at South Stanly High School for 30 years. While still teaching he furthered his education by earning a Master’s degree in Education and a Certificate of Advanced Study in Education. During his time at South Stanly he was also involved in their athletics program for a number of years. After continuing his education at Bowman Gray School of Medicine at Wake Forest University, he became the first Nationally Certified Athletic Trainer working in high school athletics in Stanly County. He also volunteered as an athletic trainer with the North Carolina Special Olympics and with the North Carolina State High School Wrestling Championships. In his retirement he valued spending time with his family and playing bridge with his friends. Howard was a long time member of First Lutheran Church Albemarle, where he served as a council member, lead usher and communion assistant, Youth leader, Sunday school teacher, and a member of Lutheran Men’s Group. After moving to Greensboro, NC, to be closer to family he then became a member of First Lutheran Church Greensboro. While there, he became active in Face Out and served as the treasurer the last several years. In addition to his parents, Howard was preceded in death by his son Chad Randall Whittington, and brother Roscoe Whittington. He is survived by his wife Rachel Whittington of the home, son Russell Whittington of Greensboro, NC, daughter Kendra Whittington of Greensboro, NC, brother and sister-in-law Clyde and Barbara Whittington of Lenoir, NC, and sister and brother-in-law Jean and Marshall Johnson of Granite Falls, NC. Graveside service will be held at 11 am Saturday, January 8, 2022 at Stanly Gardens of Memory in Albemarle, NC followed by Memorial service at 3 pm at First Lutheran Church in Greensboro, NC with Rev. Jay Hilbinger presiding. In lieu of flowers, the family is requesting memorials be made to Out of the Garden Project at www.outofthegardenproject.org who provides food and other assistance for children in need. Stanly Funeral Home in Albemarle, NC is assisting the family.

Howard James Whittington aged 76 passed away peacefully surrounded by his family on December 28, 2021. He was born June 24, 1945 to Homer and Georgia Whittington in Lenoir NC. After graduating from Lenoir-Rhyne College (now University) in 1968... View Obituary & Service Information

The family of Howard James Whittington created this Life Tributes page to make it easy to share your memories.

Send flowers to the Whittington family.