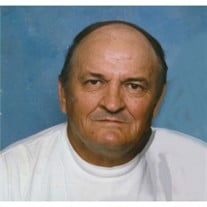 Horace Miller Thompson, 78, of Albemarle, died Wednesday, January 25, 2017 at his home. Mr. Thompson was born November 20, 1938 in Charlotte, NC to the late Arlene Pelletier Thompson and Edward Thompson. A graveside service will be held at 10:00AM... View Obituary & Service Information

The family of Horace Miller Thompson created this Life Tributes page to make it easy to share your memories.

Send flowers to the Thompson family.