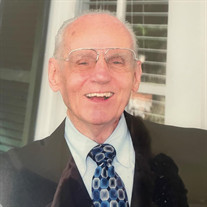 Ernest H. “Bud” Morton, Jr. passed away on Thursday, March 10, 2022. He was born on November 26, 1926 in Albemarle, NC. He was preceded in death by his beloved wife Joann G. Morton. The family will receive friends at the First Baptist Church Fellowship Hall on Tuesday, March 15, 2022, following the memorial service in celebration of his life to be held in the Sanctuary of First Baptist Church at 11:00 o’clock a.m. He was the son of the late Ernest H. Morton, Sr. and Yates Coggin Morton. He had six sisters, all of whom are deceased except Ernestine “Teeny” Morton Talbert of Roxboro. Bud is also survived by two children, daughter, Mary Jo Morton Russell and son Mark Harrison Morton and his wife Becky Ann Morton, five grandchildren, Nathaniel James Russell and his wife, Karmen, Anna-Yates Russell Lipcsak and her husband, John, Caine Harrison Russell, Jacob Harrison Morton and his wife, Trisha and Sarah Catherine Morton Morelli and her husband, Marcus and five great grandchildren. Bud graduated from Albemarle High School in 1943 and enlisted in the Army Air Corp in 1944. The Army sent him to school at Clemson College (now Clemson University). Following one year at Clemson, he received his basic training at Biolxi, MS. He was then transferred to Amarillo, Texas to be trained as an airplane and engine mechanic for B-29s. He successfully completed his B-29 training and was given a diploma evidencing he was a certified airplane and engine mechanic for B-29s. He was then transferred to Okinawa by way of Guam where he served as a flight clerk and as a P-47 fighter plane mechanic. He returned to the States in 1947. Bud enrolled in Pfeiffer College (now Pfeiffer University) in January of 1948 and graduated from there in 1949. From there, he enrolled in Wake Forest College (now Wake Forest University) graduating from there in 1950 with a Bachelor of Science undergraduate degree. He then enrolled in the Wake Forest School of Law and graduated from there in 1953, at the conclusion of which he was certified by the North Carolina Bar Examiners to be qualified as an attorney and counselor at law to the practice of law in the courts of North Carolina. Bud started his practice of law in October 1953, and he continued his practice until he retired December 31, 2012, a total of 59 years. From 1960 to 1968, he was elected as solicitor (prosecutor) for Stanly County every two years by the citizens of Stanly County to prosecute the criminal cases that had jurisdiction in the Stanly County General Court. He practiced law in Albemarle for 59 years, mainly as a trial lawyer for both civil and criminal cases, but for the last five or six years of his practice his concentration was in estates, real estate and estate planning (wills and trusts). Bud was an avid runner, commencing when he was 51 years old and ending when he was 82 years old. During his running career he ran ten marathons (marathon distance is 26 miles plus 385 yards) and completed all of them. He was 78 years old when he ran his last marathon. He logged in more than 35,000 miles during his running years. In 1996 he was chosen by the Olympic Torch Committee to carry the Olympic torch preceding the World Olympic Games that were held in Atlanta, GA. In 1999 he was named Chairman of the Host Town Committee for Stanly County’s Special Olympic World Games to be held in Raleigh, NC who was to arrange accommodations for the Athletes from Zimbabwe and Bosnia. He continued to volunteer with Special Olympics for many years. In 2006 he was a Red Cross volunteer to the Gulf Coast following Hurricane Katrina and while there, Hurricane Rita, where for three weeks he served those who had been displaced from their homes due to the hurricanes. In 2011, Beverly Eaves Perdue, Governor of North Carolina, Reposing special confidence in the integrity, learning and zeal of Ernest H. Morton, Jr. conferred upon him the Long Leaf Pine, with the rank of Ambassador Extraordinary Privileged to enjoy fully all rights granted to members of this exalted Order, among which is the special privilege to propose the North Carolina Toast in select company anywhere in the free world. He served more than twenty years as legal counsel for the Stanly County Board of Education, and for more than twenty years he served as legal counsel for the Board of Trustees of Stanly Community College. He is a past president of the Albemarle Lions Club. He has served on the Board of Directors of the Stanly County Family YMCA and Albemarle Lions Club, and most recently served as a member of the Advisory Board of the Stanly Senior Center. For thirteen years he coached Optimist Little League Club Baseball, and he enjoyed every minute of it. Today, he sees some of his players who are now adults in their 30s and early 40s and are leading productive lives. He claims no credit for their success but he is proud of each of them. As a member of the Albemarle Lions club for more than 62 years (2019), he and other club members have displayed the American Flag on special occasion days, eq. Pearl Harbor Day, July 4, etc. to show the Club’s patriotism to our military forces, past and present, that have provided us with freedom from other rulers who do not share our values. Bud was instrumental in forming the Summer Time (VIP) Picnic. The Lion’s Club named the picnic, “The E.H. (Bud) Morton VIP Summer Picnic”. Following his retirement from practicing law, Bud started delivering meals in the Meals on Wheels program in Stanly County, to those who, due to age, or illnesses, or were unable to provide meals for themselves. E.H. (Bud) Morton attended First Baptist Church in Albemarle for over 88 years. He was a member for 80 years. Bud was a deacon, serving as Chairman for a period of time, a Sunday School teacher for over 50 years, and served on various committees. In memory of his late wife, Joann G. Morton, Bud gifted a baby grand piano to the Church.

The family of Ernest H. "Bud" Morton Jr. created this Life Tributes page to make it easy to share your memories.

Send flowers to the Morton family.