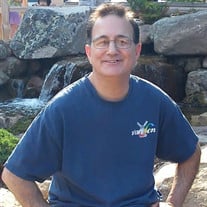 Eric Lee DelSanto, Sr., 62, of New London, NC, passed away in his home after a lengthy illness. His funeral service will be 2pm Sunday, May 15, 2022 in the Stanly Funeral Home Chapel of Albemarle with Pastor Curtis Williams officiating. The... View Obituary & Service Information

The family of Eric Lee DelSanto Sr. created this Life Tributes page to make it easy to share your memories.

Send flowers to the DelSanto family.