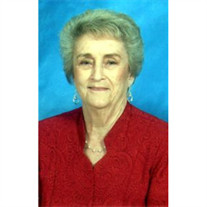 Mrs. Ella Blanch Hathcock Hinson passed away at her home surrounded by her loving family on Thursday April 20, 2017. She was born on August 24, 1924 to the late Millard Philmore Hathcock and the late Helen Sanders Hathcock. She was the last remaining sibling having been preceded in death by three sisters and seven brothers. She was a devoted wife to Adam Claude Hinson who preceded her in death in 2006. She was a faithful charter member of Highland Baptist Church and attended as long as her health permitted. She enjoyed gardening, cooking, needlepoint, bible studies, and fishing at the coast. Her most precious time was spent with her large family. Mrs. Hinson is survived by her four children and families, Dr. Eddie Burris and Carolyn Burris of Inman, SC, Jim and Pam Hinson of New London, Ty and Barbara Hall of Albemarle, and Kathy Hinson Lewis of New London. Her grandchildren are Dr. Julie Petlick and Joel Petlick of Raleigh, Michael Burris of Inman, SC, Heather and Scott Turner of Inman, SC, Dr. Matthew and Katie Burris of Inman, SC, Josh Hinson of Oak Island, NC, Jessica Ella Lewis of New London, Daniel Lewis of New London, and Christopher Adam Hall of Albemarle. Also surviving are six great grandchildren and her devoted kitty, ?Molly?. Services will be held on Sunday April 23, 2017 at Highland Baptist Church at 3 PM. The interment will follow the service in the church cemetery. The family will receive friends from 2 PM until 3 PM in the sanctuary prior to the service. In lieu of flowers please make donations to Hospice of Stanly and the Uwharrie at 960 N. 1st Street. Albemarle, NC 28001 or Humane Society of Stanly County at 2049 Badin Rd. Albemarle, NC 28001

Mrs. Ella Blanch Hathcock Hinson passed away at her home surrounded by her loving family on Thursday April 20, 2017. She was born on August 24, 1924 to the late Millard Philmore Hathcock and the late Helen Sanders Hathcock. She was the last... View Obituary & Service Information

The family of Ella Hathcock Hinson created this Life Tributes page to make it easy to share your memories.

Send flowers to the Hinson family.