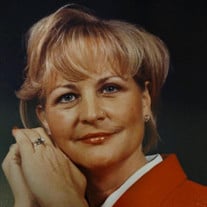 Cheryl entered the gates of heaven on October 20th, reuniting with her husband, mother, father, and eldest sister. Cheryl was born on November 6, 1957, to Macon (Stony) and Sylvia Burleson in Jacksonville, North Carolina. Cheryl grew up in Norwood, graduating from South Stanly High School in 1976. She attended UNC-Charlotte where she graduated with a Bachelor of Arts in Business Administration in 1980. She worked for the Credit Bureau of Charlotte until joining Prince Parker Associates July 5, 1995 where she was employed as Director of Sales. Cheryl married the love of her life, Donnie, on December 28, 1991. Donnie preceded her in death in 1997. They welcomed their twins, their other great loves, Lee and Danielle, on February 18, 1996. Cheryl and her mother devoted their lives to giving Lee and Danielle the best lives possible. Cheryl was a long-time member of Sharon Presbyterian Church where she served as both a Sunday School Teacher and an Elder. She was a magnanimous woman and enjoyed regularly volunteering along with her family to serve the church and community Cheryl was a member of Credit Professional International (CPI). She served as an officer at the local and state level and later served as International President in 2017-2018. With a love for cooking and entertaining, her house came to be a second home to many of her children’s friends, a refuge filled with warmth, laughter, and baked goods. She looked forward to her yearly dinner party for her CPI group and enjoyed baking birthday cakes for her co-workers at Prince Parker. She was a fighter; she responded to a cancer diagnosis in 2018 with a fierce resolve that it would not win, and it did not. She was cancer free for over two years. When cancer returned in the summer of 2021, she was determined to beat it again. She fought tenaciously and rang the bell to end her final round of chemo on October 13, 2021. It was not cancer that took her, but a rare side effect of chemo/immunotherapy. She will be dearly missed by all who were lucky enough to know her. She was preceded in death by her father, Macon Burleson (1970); her husband, Donnie Davis (1997); her sister, Stephanie Burleson (2014); and her mother, Sylvia Burke (September 16, 2021). She is survived by her two children, Lee Davis and Danielle Davis of Charlotte; her sister, Alison Cline (Rudy) of Ocean Shores, WA; her niece, Alexandra Elwell (Zahran) of Marysville, WA; her aunt, Eleanor Burleson; her uncle, Robert Hitch, and many cousins. Most importantly, Cheryl would want you to know that her work here is finished. In true businesswoman fashion, she received a call, an offer you cannot decline, for an appointment from which she will not be returning. This assignment comes with a huge sign-on bonus, a reunion with family and friends she has not seen in a long time. Her loved ones are committed to honoring her legacy by living their lives to the fullest just as she did with hers. In lieu of flowers, please donate to the educational fund for her two children, Danielle and Lee. A celebration of life for Cheryl and her mother will be held November 6, 2021, at Sharon Presbyterian Church at 2:00.

Cheryl entered the gates of heaven on October 20th, reuniting with her husband, mother, father, and eldest sister. Cheryl was born on November 6, 1957, to Macon (Stony) and Sylvia Burleson in Jacksonville, North Carolina. Cheryl grew up in Norwood,... View Obituary & Service Information

The family of Cheryl Burleson Davis created this Life Tributes page to make it easy to share your memories.

Cheryl entered the gates of heaven on October 20th, reuniting...

Send flowers to the Davis family.