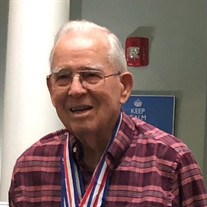 Charlie Junior Speight, 92, of Albemarle passed away on Friday, March 11, 2022 in Spring Arbor Assisted Living. His funeral service will be at 2 PM Wednesday, March 16, 2022 at Pleasant Grove Baptist Church. Burial will follow with full military rites in the church cemetery. The family will receive friends at Stanly Funeral and Cremation care of Albemarle from 6 until 8 PM on Tuesday evening. CJ is predeceased by his wife Mazelle Speight of 40 years and his second wife Peggy Jean Speight of 17 years. In addition to his parents, Charlie William Speight and Bertha Speight, he was also preceded in death siblings Max Speight, Ray Speight, Gad Speight, Bernice Burleson, Ruel Speight, and Earl Speight. CJ was born in Albemarle, NC on June 8, 1929 and graduated from Endy High School in 1949. He served in the US Army during the Korean War from 1951-1952. He was discharged from the reserves in 1956. Family was always CJ's #1 love. He enjoyed spending time watching his grandchildren play ball for many years. He loved to garden and give away the vegetables to his neighbors and friends. CJ worked as a service technician for NC Natural gas for over 40 years. He attended Pleasant Grove Baptist Church for his entire life and loved serving at his church. He was a deacon for many years and also served on many committees. CJ loved playing sports and in his later years he loved playing horseshoes with his buddies at Weaver Park in Frog Pond, NC. Mr. Speight is survived by his son Sherwin Speight (Tricia) of Hickory and Janet Eudy (Rick) of Oakboro, sisters Blanche Almond and Helen Teeter and brother Keith Speight (Sue) all of Albemarle, grandchildren Erica Kouns (Andrew), Joshua Speight, Cody Eudy (Stephanie), Tyler Eudy, and Austin Eudy, as well as great-grandchildren Rowan Speight, Noah Kouns, Charli-Ann Kouns, Ansley Eudy, and Jackson Eudy.

The family of Charlie Junior Speight created this Life Tributes page to make it easy to share your memories.

Charlie Junior Speight, 92, of Albemarle passed away on Friday,...

Send flowers to the Speight family.