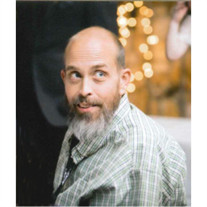 Brian Robert Brown, or as his son called him, ?Superman,? 43, of Albemarle passed away on March 8, 2017 in his home, surrounded by family and friends. ?He was born in Kanawha, West Virginia on December 3, 1973 to Jerald Andrew Brown and Regina Gail Mullins Brown. ?He graduated from Surry Central High School in 1992. On January 17, 1997, he was married to Wendy Marie Locklear Brown in Stanly County. ?They have three children Brittney, Andrea and Cameron. ?He was a loving and cherished husband, father, son, brother, and friend. ?He made a lasting impact on the community and stole the hearts of many. Mr. Brown was employed from 1992 until the present as a Purchasing Manager by Ketchie Incorporated in Kannapolis. ?Brian was a member of Vine Life Baptist Church. ?He always had a love for children and enjoyed coaching football, basketball, and softball. ?Brian was an active member of the booster club at West Stanly High School and an avid supporter of the Colts football team. He had a passion for Panthers football and loved participating in ?Jokers and Pegs? tournaments with family and friends. Brian is survived by his beloved wife Wendy; his son Cameron; and a daughter Andrea of Albemarle. ?He is also survived by his parents, Jerald and Regina Brown of Greeneville, Tennessee, and his brother, Mark, of Mount Airy, NC. ?He is also survived by his in-laws, Earl and Pam Locklear of Albemarle, NC and brothers-in-law, Brian and Earl Locklear. ?He also leaves several nieces and nephews. ?He was preceded in death by a daughter, Brittney. Funeral service will be held at 2:00PM on Friday, March 10, 2017 in the Stanly Funeral and Cremation Care Chapel officiated by Pastor Gary Hunsucker. Visitation will be held from 5:00-8:00PM on Thursday at Stanly Funeral and Cremation Care. Burial will follow the funeral in Stanly Gardens of Memory. In lieu of flowers, memorial contributions can be made to the Brian Brown account at Stanly Funeral and Cremation Care or to Hospice of Stanly and the Uwharrie at 960 N 1st Street, Albemarle, NC 28001. Click here to watch a video tribute of Mr. Brown. Stanly Funeral and Cremation Care is serving the Brown family.

Brian Robert Brown, or as his son called him, ?Superman,? 43, of Albemarle passed away on March 8, 2017 in his home, surrounded by family and friends. ?He was born in Kanawha, West Virginia on December 3, 1973 to Jerald Andrew Brown and Regina... View Obituary & Service Information

The family of Brian Robert Brown created this Life Tributes page to make it easy to share your memories.

Send flowers to the Brown family.