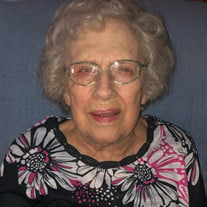 Alene Lowder Brooks June 26, 1925-March 2, 2022 Alene Marie Lowder Brooks of Richfield, NC, passed from this life into life eternal after several years of declining health Wednesday, March 2, 2022. The young woman who declared early on in her life that she would “never marry a farmer” spent her entire life as a farm gal. Early on in life, she assisted on her parents farm in New London, NC. She later spent her whole life with the love of her life farming the rocky land of Northern Stanly County. Born on June 26, 1925, she was the daughter of the late John Frank Lowder and Quennie Tine Smith Lowder. She was a graduate of New London High School and Salisbury Business College. On July 14, 1945, Alene married a dashing young farmer from Richfield, NC. Together, these two committed their lives to farming and seeking to make their little place in the world a better place to live. At the center of it all was their family and deep Christian faith. At the time of her death, Alene was the oldest member of New Mount Tabor United Methodist Church. Over the years, she served her church family and friends in many ways. She taught Sunday School, held various leadership positions, and always loved being a part of the United Methodist Women. During her life, Alene volunteered to deliver Meals on Wheels, she volunteered at Stanly Regional Medical Center, and was continuously involved with the schools where her children and grandchildren attended. However, Alene will mostly be remembered for her kind heart and her ability to create and serve delicious meals to her family and friends. She loved to serve and wait on everyone! Alene was preceded in death by her loving husband, Charles Spurgeon Brooks. Also preceding her in death were three brothers, James D. Lowder, John Frank “Bud” Lowder, and C. Ray Lowder, and four sisters, Esther L. Bunting, Cecile L. Almond, and Ada Lowder. She is survived by her four children: Judy Allred and husband Jim, Butch Brooks and wife Wanda, Steve Brooks, and Jed Brooks and wife Bonnie, all of Richfield. Alene was blessed to have nine grandchildren: Grant Allred (April), Anna Allred-McGee (Brant), Elizabeth Sutton (Brad), Jennifer Carrick (Jamie), Laura Daugherty (Lee), Kim Shaver (Jeremy), Amanda Bowen (Kent), Jed David Brooks, Jr., Jenna Brooks (Philip Nanney), and 23 great-grandchildren: Jacob, Grayson, and Laurel Allred, Isabella, Sophia, and Evelyn McGee, Ashland, Addison, and Garrett Sutton, Tanner, Avery, and Hannah Carrick, Catherine, Tyler, and Lily Daugherty, Luke and Charlie Shaver, Grier, Blake, and Quinn Bowen, and Emery, Carson, and Graham Nanney. Alene and the family were blessed at the end of her life by the love and support of special caregivers, Marlene Helms, Teresa Helms, Paityn Helms, Patty Wilson, and Lucy Efird as well as many other angels of mercy. The family is grateful for the compassionate care shown by staff members at Hospice of Stanly & the Uwharrie. A celebration of life for Alene will be held on Sunday, March 6, 2022 at New Mount Tabor UMC in Richfield, NC. The officiating ministers will be the church’s pastor, Rev. Leslee Wray, and Rev. Jim Allred, son-in-law to Alene. Visitation will be held at Stanly Funeral Home on Saturday, March 5, 2022 from 6pm-8pm. Memorials may be made to The Building Fund at New Mount Tabor UMC, 40237 Millingport Road, Richfield, NC 28137; Bridge to Recovery, P.O. Box 322, Albemarle, NC 28002; or Hospice of Stanly & the Uwharrie, 960 N. 1st Street, Albemarle, NC 28001.

The family of Alene Lowder Brooks created this Life Tributes page to make it easy to share your memories.

Send flowers to the Brooks family.